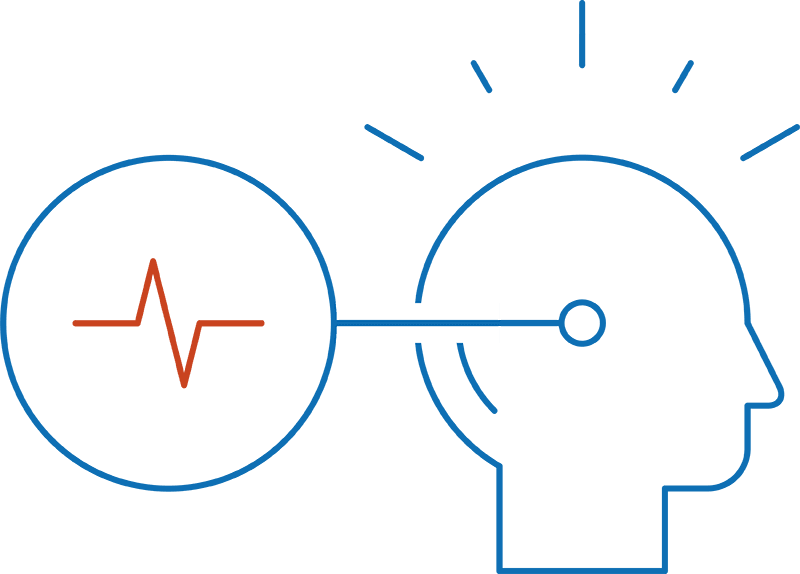 Consumer Reports has no financial relationship with any advertisers on this site.

For people with hearing loss, using a hearing aid is associated with a reduced risk of three common health problems of aging — dementia, depression and falls — according to a recent study in the Journal of the American Geriatrics Society.

This study adds to the growing body of research that links hearing loss to memory issues and dementia. “Cognitive decline is much higher among people with hearing loss,” says study author Elham Mahmoudi, an assistant professor in the department of family medicine at the University of Michigan.

The new study also suggests using hearing aids might help delay the onset of dementia in some people, and it’s the largest study to date to look at this possible connection, Mahmoudi says.

Here’s what this and other research has shown about hearing loss and the brain.

The study found that people who received hearing aids in the three years after being diagnosed with hearing loss had lower rates of dementia, depression and falls than those who didn’t get the devices.

To get these findings, University of Michigan researchers examined managed-care insurance claims from 114,862 adults with hearing loss between 2008 and 2016. All were 66 or older.

The researchers looked at the study subjects’ insurance claims for three years after their hearing loss diagnosis. They did this to determine which people with hearing loss had been prescribed a hearing aid, which had not, and which study subjects in both groups were later diagnosed with dementia, depression or a ­fall-related injury. Then they compared the difference between the hearing aid group and the non-hearing-aid group.

What earlier studies have found

A lot of prior research has found that hearing loss is connected with an increased risk of memory problems.

In a 2018 analysis published in JAMA Otolaryngology-Head & Neck Surgery, researchers pooled the results of 36 studies and found that age-related hearing loss was linked to an increased risk of dementia and cognitive decline and impairment.

(Other previous research has also linked hearing loss to depression and falling.)

Fewer studies have been conducted on whether the use of a hearing aid might delay or prevent the onset of dementia, says Jennifer Deal, an assistant scientist in epidemiology at the Johns Hopkins Bloomberg School of Public Health, who wasn’t involved in the new study.

But like the new research, several small studies that have addressed the question in recent years have found that the use of hearing aids is linked with a lower risk of dementia.

Scientists don’t have definitive answers about the effects of hearing loss on brain health. One theory, Deal said, is that when your hearing is damaged, the brain must expend more effort to decode the sound signals it takes in, possibly at the expense of other brain functions.

Another hypothesis is that hearing loss changes the physical structure of the brain in a way that could harm memory — and some evidence from brain imaging studies supports this theory.

Hearing loss can also increase a person’s feeling of social isolation, because the condition makes it harder to communicate. And social isolation is linked to a number of health problems, including heart disease and Alzheimer’s.

Could hearing loss cause dementia?

Neither prior studies nor the new one offers firm proof that hearing loss is a cause of dementia. It’s not clear yet what actually causes Alzheimer’s or some other types of dementia.

The new study was observational — meaning it looked only at data on existing health outcomes, rather than testing the effects of a hearing aid. So, while it found a pattern, it couldn’t establish that hearing problems actually cause dementia.

And, say researchers, a number of other factors could have influenced the outcome of the study. For instance, the researchers weren’t able to factor in socioeconomic status in their analysis. That’s important because people with more education and economic resources have been found to be less likely to experience cognitive decline as they age.

For scientists to be able to say definitively that hearing loss is a cause of dementia, a randomized controlled trial is needed, comparing similar groups of people, some of whom have their hearing loss treated with a hearing aid, and some who don’t.

Deal and her research team are conducting one such trial, so she hopes to be able to answer this question within a few years.

The upside of hearing aids

While the new study found that for people with hearing loss, using fitting hearing aids was associated with a lower risk of dementia, that doesn’t mean aids can prevent dementia or even reduce risks.

It’s just too early to say, without the results of a randomized controlled trial.

Still, the upside of using these devices for hearing loss can be substantial.

“If someone is considering a hearing aid, we do know that it should help improve the quality of life, help with communication,” Deal says. “We do know there are benefits, we just don’t know if cognition is one of them.”

What to do if you have hearing trouble

If you notice you’re having difficulty hearing — frequently turning the television up, asking people to repeat themselves or missing parts of in-person or over-the-phone conversations — see your doctor.

Hearing loss may be reversible, if it’s caused by a problem such as earwax clogging your ear canal, an infection or a damaged eardrum. A doctor can evaluate your ears for potential physical problems that could be interfering.

And have your hearing tested. If the problem with your hearing isn’t fixable, you can find out how extensive the damage is. A hearing professional can tell you whether you might benefit from a hearing aid.

And if your health-care providers think a hearing aid will help you, it’s best to start using the device sooner rather than later.

“Research suggests that the earlier you adopt [a hearing aid], the better the outcome,” Deal says.

For mild to moderate hearing loss, you may not need a costly device

Consumer Reports is an independent, nonprofit organization that works side by side with consumers to create a fairer, safer, and healthier world. CR does not endorse products or services, and does not accept advertising. Read more at ConsumerReports.org.